United have backed away from a loan deal for Juventus and Brazil winger Douglas Costa, 29, and will instead consider a move for Bournemouth’s 23-year-old Wales forward David Brooks. (Manchester Evening News)

United have been told they must pay Bournemouth £40m to sign Brooks. (Sun)

Tottenham Hotspur are planning a move for Arsenal’s Ainsley Maitland-Niles – the versatile 22-year-old Englishman played in defence and midfield for the Gunners last season. (Mail)

Liverpool manager Jurgen Klopp is weighing up whether to sign Bayern Munich’s Spanish midfielder Thiago Alcantara, who is available for about £30m and keen on a move. Finance is not the key consideration, with the Reds needing to move other midfielders on first. (Independent)

Brighton will not accept Leeds United’s third bid for English defender Ben White and have reiterated that the 22-year-old is not for sale. (Argus)

Aston Villa are poised to make an opening bid of £18m for Brentford’s English striker Ollie Watkins, 24, but the Championship side are holding out for £25m. (Mail)

Contract talks between Manchester United and English goalkeeper Dean Henderson, 23, are at an advanced stage. The deal will be worth more than £100,000 a week. (Sky Sports)

United centre-back Chris Smalling, 30, is keen to rejoin Roma on loan after spending last season with the Serie A side. (La Gazzetta dello Sport, via Mirror)

Watford’s English striker Troy Deeney, 32, wants to stay with the Hornets, despite their relegation to the Championship. (Talksport)

Newcastle United striker Dwight Gayle is set to see out his contract at the club, despite interest from other Premier League sides in the 29-year-old Englishman. (Telegraph – subscription required)

Real Betis are in talks with Brighton over a move for Spanish right-back Martin Montoya, 29. (Sky Sports) 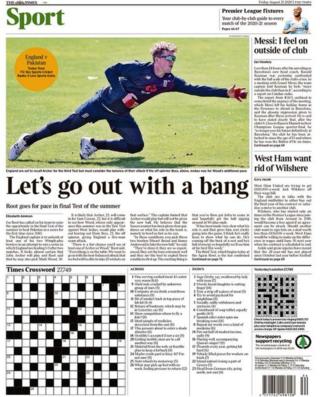 The back page of The Times