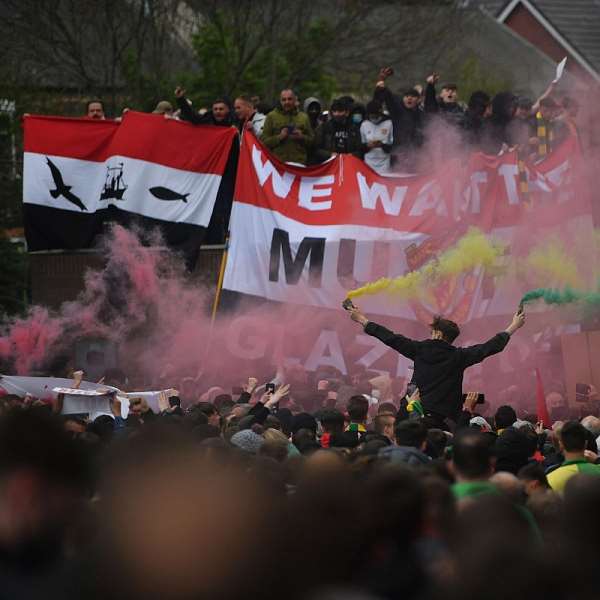 Manchester United could face a points deduction after fans forced the postponement of their Premier League fixture with Liverpool.

Both the Premier League and Football Association are investigating following the mass protests around Old Trafford on Sunday.

And the organisations are speaking with Manchester United and the local authorities to piece together exactly what has happened, and where responsibility lies.

Under Premier League rules, points can be deducted where a club fails to ensure the safety of players and staff, as well as entry and exit from the ground.

The FA can also impose fines, in a long list of potential punishments, which includes ground closures and suspension from competitions. And it can demand the club responsible for any postponement compensates the other side for any costs.

Hundreds of United supporters stormed the pitch at Old Trafford ahead of their game against Liverpool in protest at the club’s American owners, the Glazer family, before clashing with police in ugly scenes.

The FA and Premier League have between them plenty of rules that cover the postponement of matches and the safety of players and staff, which will now be examined by the authorities and the club.

In the Premier League Handbook, rule K14 states that the home club must make sure that the players and match officials can enter and leave the stadium safely and that there is safe environment in which to play the match.

And rule K13 also states that the players’ entrance, as well as the parking area and the points of entry, are adequately policed or stewarded.

Representatives from the two teams and the Premier League came together to discuss the situation at Old Trafford at 4pm yesterday, after which it was determined that for safety reasons the fixture could not go ahead.

Both teams were held back at their hotels by Greater Manchester Police, while match referee Michael Oliver was also delayed in accessing the ground.

A statement from Greater Manchester Police said: ‘Following discussion with The Premier League, Trafford Council and the clubs, a joint decision was made to postpone the match for safety reasons.’

The Premier League has the power to investigate the breach of any rule and can arrange a commission of inquiry. The commission’s sanctions include imposing a fine or a points deduction.

However, the situation is complicated because the Premier League also has the power to refer the matter to the FA to be determined under its rules.

According to the FA rule book, regulation E20 says that clubs are responsible for their supporters and may be punished for any improper, violent, threatening, abusive, indecent behaviour, including the throwing of missiles.

In this instance, a flare was also thrown in the direction of the Sky Sports TV gantry at Old Trafford.

The FA rules states that in serious cases where ‘the FA’s investigations conclude that the club concerned did not do enough to either prevent and/or deal with its supporters’ misconduct, disciplinary charges may follow’.

The FA can set up a regulatory commission to investigate any alleged breach of the rules and if proven, it can warn a club about future conduct, suspend it from football activity, impose a fine of a ground closure.

In a statement Manchester United said: ‘Following discussion between the Police, The Premier League, Trafford Council and the clubs, our match against Liverpool has been postponed due to safety and security considerations around the protest today.

‘Discussions will now take place with the Premier League on a revised date for the fixture.

‘Our fans are passionate about Manchester United, and we completely acknowledge the right to free expression and peaceful protest.

‘However, we regret the disruption to the team and actions which put other fans, staff, and the police in danger.

‘We thank the police for their support and will assist them in any subsequent investigations.’

The Premier League also issued a statement after the game was called off.

‘Following the security breach at Old Trafford, the Manchester United vs. Liverpool game has been postponed,’ it said.

‘This is a collective decision from the police, both clubs, the Premier League and local authorities.

‘The security and safety of everyone at Old Trafford remains of paramount importance. We understand and respect the strength of feeling but condemn all acts of violence, criminal damage and trespass, especially given the associated COVID-19 breaches.

‘Fans have many channels by which to make their views known, but the actions of a minority seen today have no justification.

‘We sympathise with the police and stewards who had to deal with a dangerous situation that should have no place in football.

‘The rearrangement of the fixture will be communicated in due course.’